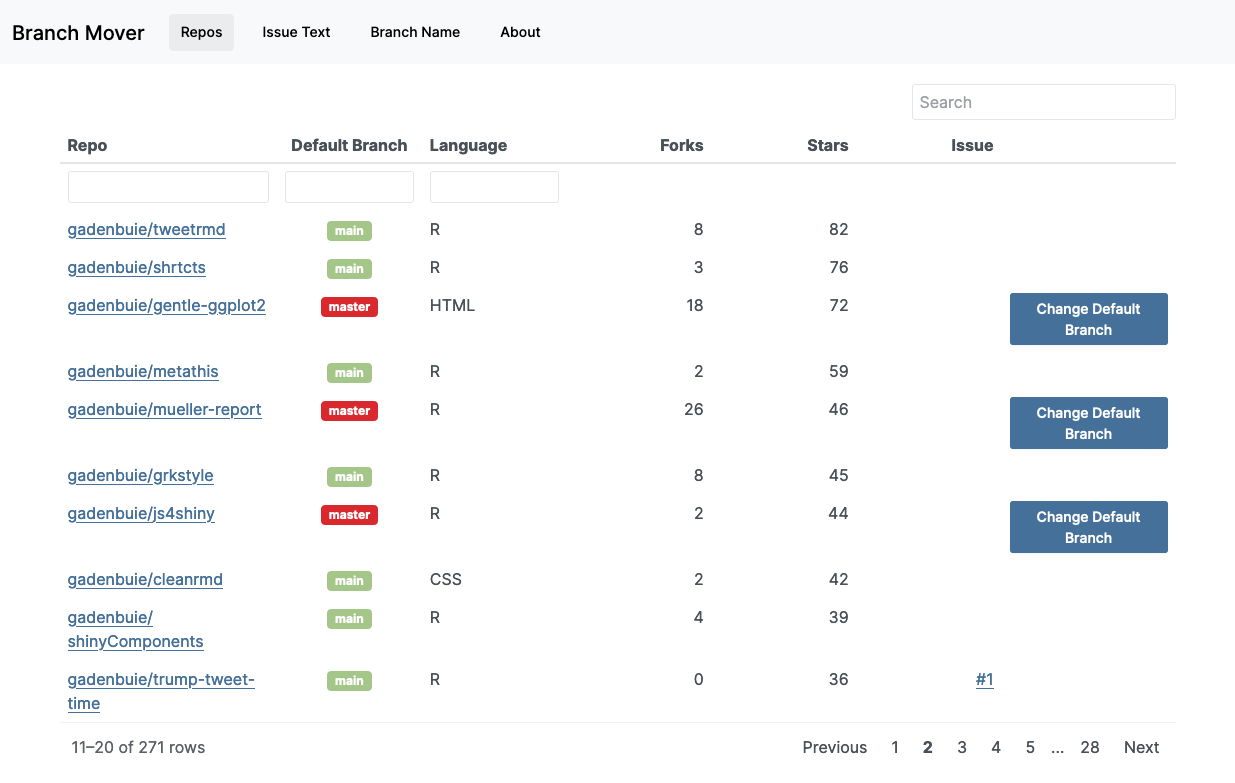 Over the past year, there’s been a concerted effort among people who create and manage git repositories to move away from the default branch name of master to something more intentional: typically main.

RStudio and the tidyverse team recently undertook the giant challenge of changing the default branch of RStudio’s approximately 350 public repositories (most of which are all open source!). Jenny Bryan wrote about the branch-changing experience on the tidyverse blog.

Watching Jennys’s superb stewardship of the change inspired a new app branchMover. Or is it named Branch Mover? Admittedly, I didn’t spend much time thinking about the name because the app won’t be in your life for very long.

The goal of branchMover is to help you coordinate a default branch change across the repos you maintain. The app shows you all of the repos associated with your GitHub account and their current default branch. Because you might want to start with your less popular repos, you can sort by number of forks and stars on each repo.

I followed Jenny’s lead and the app will create an issue announcing the change. If all goes well, the issue is closed a few seconds later with instructions for your users on how to update any local copies of your repo. If it doesn’t go well, the issue stay open as a reminder to you to finish the process.

Unfortunately, branchMover doesn’t update the default branch in your local copies of your repos. Thankfully, this is relatively pain-free with the usethis::git_default_branch_rediscover() function, added in usethis version 2.1.2.

The next time you find yourself in your local copy of your repo, run git_default_branch_rediscover() to reconfigure your branch situation.

You can install branchMover from GitHub with:

The app uses the usethis and gh packages. You need to configure gh with a Personal Access Token to be able to authenticate with the GitHub API. Read more about setting up a PAT in one of these places:

Then, in RStudio, run the app with:

If you’d like to explore or reconfigure the default branch of repositories that you manage in other organizations, provide app() with the user or organization name. Branch Mover will tell you how many repos you have access to in the organization and it won’t let you update branch names for repos where you don’t have admin permissions.

If you want to learn more about how git’s default branch works and why many are opting to choose a more intentional default, I highly recommend Jenny’s detailed article Renaming the default branch, which I’ll quote directly:

Historically, master has been the most common name for the default branch, but main is an increasingly popular choice. There is coordinated change across the Git ecosystem that is making it easier for users to make this switch, for example:

Branch Mover was built by Garrick Aden-Buie. Come say hi to me on Twitter at @grrrck.